Ophiuchus, also known as Serpentarius, shot to fame as the unofficial thirteenth sign of the Zodiac. For newcomers to astrology, understanding how Ophiuchus fits into the Zodiac wheel may be confusing, especially if your birthdate falls during the window of time that the “sign” rules ( November 29 to December 17). The question: should astrologers incorporate Ophiuchus into their readings or will he eventually burn out of our cosmic lexicon?

The Man Behind The Myth 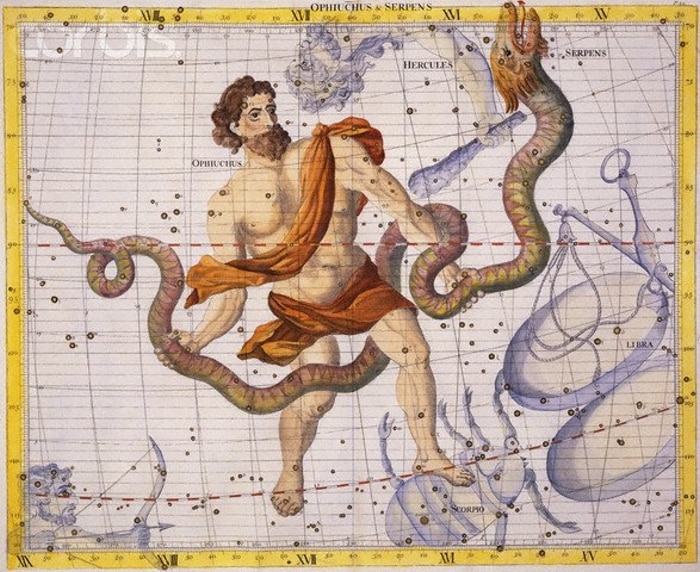 The constellation Ophiuchus falls between Scorpius and Sagittarius. The Sun travels through Ophiuchus for only 19 days during early winter, while the traditional Zodiac signs boast a 23-day window. The constellation is inspired by Imhotep (‘He who comes in peace’), a man who lived in ancient Egypt around 27 BCE. Imhotep often draws comparisons to the Biblical figure, Joseph; legend claims that he gifted mankind with the healing arts. He holds the caduceus, a staff linked to Hermes, ruler of Mercury. (It originally belonged to the Greco-Roman god of medicine, Apollo.)

If you read charts using the Sidereal system, you may consider Ophiuchus a sign of the Zodiac. But many modern astrologers read charts using the Tropical system, which defines the Zodiac around the four seasons. Following the Gregorian calendar, each season is divided into quadrants (three signs). Each sign is further broken down into quadrants (three decans). Unlike the Tropical system, the Sidereal system makes astrological evaluations according to how constellations shift. Because Ophiuchus is a prominent constellation, some Sidereal astrologers honor him as a Zodiac sign.

Speculation about the thirteenth sign arose after astronomer Parke Kunkle observed that the Moon’s gravitational pull caused the earth to wobble on its axis. According to Kunkle’s deductions, the gravitational pull shifted each Zodiac sign counterclockwise by one. (For example, those born in Libra season are actually Virgos.) But Sidereal astrologers have long since relied on the cosmos themselves, not Earth’s axial tilt, to make predictions about our lives. Check out the table below to see where your new sign falls under the Sidereal system:

Whether you consider Ophiuchus worthy of representing humankind or a fad, those who are born under this ‘sign’ may be:

The Verdict: Is Ophiuchus Part of The Zodiac?

Whether you acknowledge Ophiuchus depends on which you believe has more gravity: Earth or the stars. Many astrologers and horoscope fans feel more comfortable abiding by the Tropical system. It can be disorienting to realign yourself with a new Zodiac sign.

Western astrologers often write off Ophiuchus as a sham, but the fact remains that Ophiuchus is part of our celestial landscape. Celebrated Hindu (Jyotish) and Islamic astrologers sometimes incorporate Ophiuchus into their readings. If you’re an astrology enthusiast, you have permission to explore and relate to more than one system. Finding reflections of your experiences in both your Tropical and Sidereal natal charts doesn’t invalidate their accuracy. Astrology as a practice is rooted in higher thinking, so those who follow it have no obligation to accept any system as absolute.


©Universal Copyright 2015 is authorized here. Please distribute freely as long as both the author Alexa Pellegrini and www.QuantumStones.com are included as the resource and this information is distributed on a non-commercial no-charge basis.