You are here: Home › Emotional Healing › Interesting History of The Viking Culture

Have you ever heard about the Vikings? I am sure that you have seen or hear about the famous TV show – The Vikings. Most of the people have made the image of Viking as the raiders and savages. Well, in a way they are savages and raiders that raided Europe and England. The main reason for about very less about Viking is because there is not much-written history. The interesting thing about them is they like to wear jewelry.

When we cast our eyes on the jewelry found in Viking graves, we can estimate how the craftsmen of that time were skilled. Most of their jewelry is made of gold, bronze, resin, amber, and iron. The old jewelry was very simple and rugged but with the passage of time, they started to make more detailed and sophisticated pieces of jewelry. If you are a fan of Viking then you check the best viking shirts. 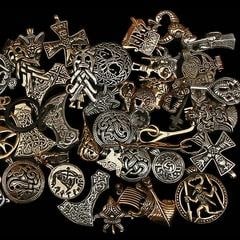 The information archeologists gathered explains the importance of jewelry among Vikings. They really love to wear a different kind of jewelry. Moreover, both men and women like to wear high-quality shiny objects. All of the Vikings are warriors or farmers. Moreover, the jewelry was not only meant for wearing but also use as a currency for commercial trades. That also explains the importance of jewelry. When they want to trade something, they took a piece of their jewelry and use it as a currency. Moreover, the Viking not only use the metals to craft jewelry but also use stones and gems to decorate it. Well, we have found the absence of stones in most of the jewelry.

One of the types of jewelry they had was amulets and pendants. The Viking people often wear these pendants. The Thor hammer was the most wore pendant in the Viking. The men are most likely to wear this pendant. Moreover, they also use other style pendants like a sword, ax, Arrow Head and Valknut symbols. Anyhow, most of them are found in graves. It means that other kinds of pendants were not commonly used. We also found pendants and amulets of cross shape in the graves. But the number of these are very few. It also means that very few of Vikings were Christians. 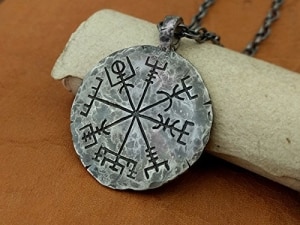 Not only the Viking wear necklaces but also other nations too. It is one of the most historical jewelry and people today also wear it. Most of the necklaces in Viking age made of silver, gold, and bronze. They also use stones and precious gems in the necklace. Anyhow glass was the main metal used for crafting necklace. That is one of the reasons that Vikings produced glass on a high scale. On the other hand, the Viking pendants were mostly used as a gift. The neck rings also wore by the Viking women but the necklace was more common.

Currently, we are not sure which gender use to wear these necklaces. Most of these necklaces found by archeologists in hoards and grace sites. They also found that the jewelry was in pieces too, maybe that meant as a currency. Moreover, wearing jewelry did not mean they like it but also to show their status and wealth.

Another common jewelry the Vikings use to wear was hair beads. Most of the beads found are made of glass. These are very famous in the modern world too. Many old-school dudes like to wear these beads on their beard. But the beads available today are cheap. There are very few beads found in graves.

Aqib Raja is a Digital Marketer, Link builder and an IT Professional. He loves to write on different topics. In free time, he likes to travel and explore the different parts of the world. You can follow him on Facebook.
View all posts by Aqib Raja →