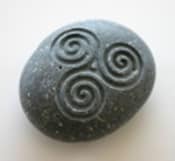 We may never really know what the mighty Celts had in mind when they designed the triskelion…However, the Greeks translate triskelion as ‘three-legged” which seems appropriate for this triple spiral symbol…and when you think of legs, motion comes to mind. It is with these principles combined with the spiritual beliefs of the Celtics people that they viewed the triskelion as a representation of man’s progress through his competitive spirit – symbolic of his growth and development over his ‘life.’

Cultural Symbolism of the Triple Spiral

The triple spiral and countless triple protrusions of sacred geometry appear in cultures throughout history as do many symbols utilizing the number three. Hence, the use of three ams in the triskelion and other symbols’ interpretations vary. Common interpretations include:

Concerning the Celts in particular, they believed in three worlds: The Otherworld, The Mortal World, and the Celestial World, and the triskelion might have held that reverence to their culture.

Exploring the Concept of Motion of the Triskelion 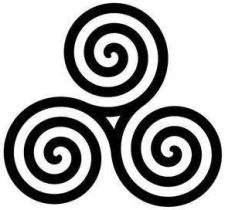 When viewing a spiral, the eye naturally flows from one end to the other – sensing its envelopment of motion. Conceptually, these spirals may have represented the action of moving forward, progressing and revolving in cycles – as with the aforementioned concepts of the spiral representing past, present, future, or creation, preservation, destruction etc.

Considering that the lunar cycles and the motion of the sun was the best ‘time-keeper’ for most cultures, it only seems reasonable that they might also consider the importance of such ‘motion’ in the skies. Some concepts associated with such ‘cycles’ include: illuminating, spirituality, intuition, mystery, femininity, completion and rebirth.

Keeping motion in mind, the triple spiral over all seemed to have some sort of universal representation concerning advancement, personal, growth, human development, and spiritual expansion. This symbol simply resonates with fluid energy!