You are here: Home › Emotional Healing › Protect Yourself from WiFi- Radiation- EMF’s

We live in the age of AI technology, that here in the western world we bathe in an unseen, sea of WiFi.

We all know of the benefits we continue to receive from this new fast growing technology,  enabling us to attain more knowledge than ever before, enabling us to communicate on a global scale, the only avenue where “Freedom of Speech” still exists, and a new realm for monetary gain.

However their is a negative side to this technology as well, that we must be aware of.

Scientist Barrie Trower of the UK says,”As stated by University Researchers, Government Scientists and International Scientific Advisors; a minimum of 57.7% of schoolgirls exposed to low-level microwave radiation (Wi-fi) are at risk of suffering stillbirth, foetal abnormalities or genetically damaged children, when they give birth. Any genetic damage may pass to successive generations.” Barrie Trower refers to WiFi as biowarfare and the New Cold War. A well hidden and silent weapon of mass genocide from the technocratic elite used against the western world.

Grigoriev et. Al. (2010) showed that 30 days exposure to unmodulated 2450 MHz microwave radiation triggered a small but significant increase in anti-brain antibodies in the blood of rats…..which could then result in an auto immune attack on the brain and / or nervous system. An example of an auto immune disease of the brain is Graves disease in which the pituitary gland (at the base of the brain) is affected.’ (17)

The Russian National Committee on Non-Ionizing Radiation Protection: in their research document ‘Health Effect on Children and Teenagers’ found; 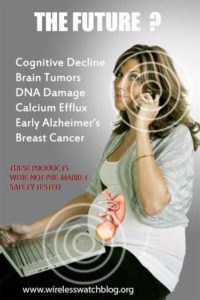 Smart Meters Radiation Exposure Up to 160 Times More Than Cell Phones. Daniel Hirsch, California radiation expert and UCSD instructor, criticizes the industry-influenced CCST report that incorrectly minimized smart meter risks, based on the widely distributed industry-generated Tell Associates report. CCST is a partner with US DOE (US Dept. of Energy), funder and promoter of smart meters. In the following analysis, Hirsch informs us that one smart meter can provide up to the full body radiation exposure of 160 cell phones; in an interview (video), Hirsch provides the average exposure, equivalent to the full body exposure from 100 cell phones. 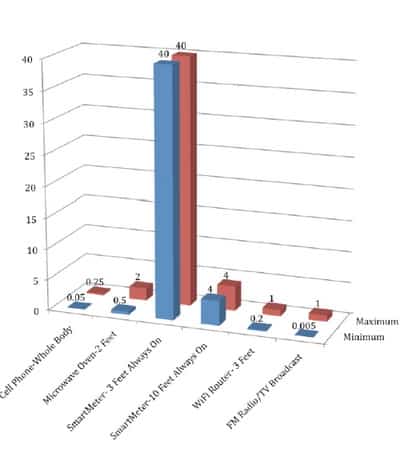 “Letter to Parents on Fertility and Other Risks to Children from Wireless Technologies” by Camilla Rees, founder of Campaign for Radiation Free Schools and electromagnetichealth.org, documents study after study that connects microwave radiation with testicular cancer, damaged sperm, and reduced fertility. In 2011, the World Health Organization (WHO) also classed Smart Boards as “2B: Possible Carcinogens.” After studies conducted at the University of Toronto’s School of Public Health later that year, the WHO was urged to reclassify this source of radiation as “2A: Probable Carcinogen.”

Government and Industry have embraced and encouraged widespread use of wireless technologies at the expense of public health. The Reflex Report was prepared by 12 scientific institutions in 7 countries. It confirmed long-term genetic damage in the blood and brains of cell phone users and other electromagnetic sources. It also showed extremely similar DNA breaks whether one used a cell phone for 24 hours, or submitted to 1600 chest x-rays! Yet public relations firms spend billions of dollars annually promoting the so-called benefits of wireless, sidestepping accumulated medical data to the contrary.

Symptoms of electro sensitivity (headaches, dizziness, fatigue, motor impairment, among others) are often not linked with cell phones, microwave ovens, and Smart Boards. Doctors are largely uneducated about this invisible health hazard.

Campaign for Radiation Free Schools can provide information on how to remediate internal sources of radiation. Fiber optics and cable are safer choices. Funds can be raised to remove wireless systems and hard-wire buildings. As Camilla Rees states, “At critical times of development, when one wants to set the stage for optimal learning, children’s environments should be electromagnetically clean.”

How many local day cares contain cell phones, microwave ovens, and Smart Boards? If succeeding grades also rely on this technology, what chance do our youth have for healthy growth? Our children are innocent of these dangers, and trust in our guidance. Will we protect them?

Wifi is a form of radiation, which by definition is the emission of energy as electromagnetic waves or as moving subatomic particles, especially high-energy particles that cause ionization. We have Gwen and Cell towers along side every highway, fire stations, police stations, shopping centers, and residential communities.

Some ways to combat the negative side effects of Wifi is to encase your home smart meters in a Faraday Cage. This will enable the wifi transmission. You can take Iodine as a dietary supplement mineral as this is a  known form of protection against all radiation. In addition one of the most beneficial uses of the shungite metaphysical  properties is to protect against electrical magnetic fields, also known as EMFs. You can wear shungite as an accessory and put some all around your home. The obvious and best form of protection in your home would be to run cable through your home instead of WiFi.

The ultimate weapon is knowledge.  Educate your friends and family. Applying knowledge is freedom. 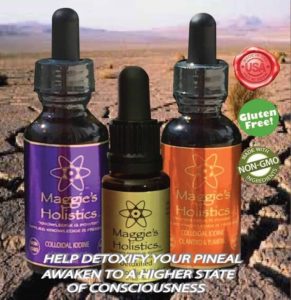