You are here: Home › Ascension › Energy and Frequencies › Inspiration › Metaphysics › Spirituality › The Sacred Language of Light 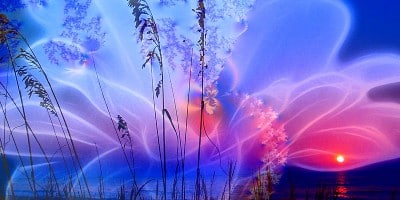 Just as I was entering into the second grade, my family decided to move across town, forcing me to change schools. During the first few days there, the first friend I made was a girl named Angela. After a few weeks, Angela invited me to a sleep-over. Of course, I was thrilled. So, everything was arranged for the coming weekend. Angela’s house was very different than my own. She was an only child and had her own bedroom but their family did not own a television and her father made sure we were in bed, lights off at 8pm. She lived in a much more structured household than I did. But I didn’t care…we played until lights-out and then giggled throughout the next couple of hours until we dozed off to sleep. This was the beginning of a beautiful friendship. Until….

One weekend Angela invited me to stay over on a Saturday night and attend church with her family the next day. I didn’t realize that her father was the minister at her church and Sunday morning services were never negotiable for her. Now, my family wasn’t religious but had the occasional “Amen” mentality and a small dose of a “fear of the lord” when it came to mixed company. Needless to say, I had no idea what to expect. When we arrived at church, all the women looked the same. They were dressed similarly, styled their hair the same and none of them wore makeup or jewelry. I had never really noticed this about her own mother, until I was in a room filled with women of the same faith. Angela explained to me that they were Pentecostal and that this was normal for Pentecostal women. I felt a bit like a duck out of water since my hair was short and my dress wasn’t anything like what they were wearing. But everyone was very nice and welcomed me.

At some point during the service, everyone stood up to “praise the lord”. They began a sort of chant (instead of a typical song) and one of the church ladies instructed me to chant with them, repeating the name “Jesus” over and over. So I joined in. I don’t recall now how long I had been doing this before I began to notice that I was no longer saying “Jesus”, but was speaking an entirely different language. No one else seemed to be speaking another language and to my 8 year old mind I was scared that something was wrong with me. But the lady who asked me to chant with them got really excited and began motioning for the others to come and “witness” my ramblings. They were cheering me on, which only added to my fear. I didn’t understand what was happening and yet, somehow I could not control it either.

After that day, Angela and I drifted apart quite quickly. I certainly had no frame of reference for what had happened and when I told my mother about it, she was sure they were devil worshippers and declared that I would never be allowed to go back there. Such is the life in the Louisiana Bible belt. I never went back to her house or her church and about six months later, our family moved back to where we lived before, reuniting me once again with the friends I had grown up with. And that brief moment of tranced-out, “speaking in tongues” was completely forgotten.

Fast-forward to young adulthood when I decided to get a puppy…the cutest little black miniature poodle that I named Maggie (short for Lady Margaret since she was such a fancy little dog). The moment I picked her up from the breeder, I was in love. As a single young woman, she kept me company. We laughed and played and cuddled. She was my best friend. But she also brought out something long forgotten, yet familiar…another language. I noticed that sometimes when we’d be playing, and I was really lost in the moment with her, I would open my mouth to speak and a completely different word (or words) would spew out. I laughed it off as “doggie speak” and decided that it was ok, because she seemed to know exactly what I was saying, even if I didn’t.

Two more dogs later, my “doggie speak” had become quite commonplace. It was a very special connection that I had with my pets to speak an entirely different language that only we knew or understood. Becoming curious about this language, I decided to ask about it during a Quantum Healing Hypnosis session; where did it come from and why did I only speak it to my animals? I was not expecting the answer I received…

…This special language is the Sacred Language of Light!

What IS the language of Light you ask? 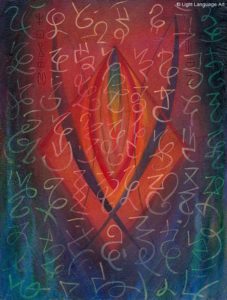 Well, thankfully my practitioner asked the same question during my hypnosis session. This is the answer given by my Higher (Infinite) Self.

Light Language is the root of all language, our original language. It is Universal. It is Sacred Geometry expressed as spoken words, tones, writing, and body movements (think in terms of American Sign Language). It is the Language of the Soul. Light Language is non-terrestrial communication imbued with multifaceted healing frequencies which brings the body, mind, and spirit into harmony and resonance with the Universe.

My Higher Self assured the practitioner that this language is perfectly normal for anyone to access because it is encoded into our DNA. The very primal genetic makeup of everything in the Universe is made up of these sacred sounds. During that hypnosis session, I was told that now that I know what this language is, access to more of it would be unlocked within my DNA. Before long, I noticed that I would begin singing this Light Language as I went about my daily routine. It became as normal as speaking English for me and I began to speak to everything in my environment in Light Language…the trees, my garden, my car, the birds and bees, the grass. As I “practiced” speaking this very old, but familiar language, my confidence in speaking it grew. My friends who have the ability to see auras and energy fields began telling me that they could see strange symbols in my field that they didn’t recognize. It was as if the Universe was giving me confirmation that I was bringing it forward into the world and when I was ready, the language was already in my energy field.

Then, in 2018, I began to connect to other people’s Higher Self to transmit messages for them in the Sacred Language of Light. During a Light Language transmission, I am able to connect directly with both my Higher Self and the Higher Self of the other person to create a unique Light Language activation recording for them. Very often, people report that the language sounds familiar to them on a very deep level. They also report that their personal connection to their Higher Self and their intuition becomes clearer, raising their own vibration and frequency as their consciousness expands. Each transmission is different and depending on the persons Soul Origin, the language can have what I term a different “dialect” (similar to how Americans have different English words than British people do for similar things).

The Language of Light plays a crucial role in helping us to navigate the quantum shift we are experiencing on Earth at this time. I personally believe that this original language is what will reconnect and align us as One here on Earth once again.

Catherine Wyatt is a Quantum Healing Hypnosis Level 2 Practitioner Certified in the Dolores Cannon QHHT Method of past life regression, and the creator of Soul Journeys Hypnosis, a unique hypnosis experience that allows one to explore Cosmic Consciousness, gaining access to multidimensional realities. Her hypnosis sessions are offered both online and in person at her office in the Houston, TX area.Because Catherine has been gifted remembrance of her Highest Self, she is able to connect to that realm and bring forward messages to others from their Higher Self in the form of Light Language Sound Healings.For more information, please visit her website at: www.catherinewyattqhht.com
View all posts by Catherine Wyatt →