You are here: Home › Inspiration › Intention › Spirituality › The Meaning of Namaste: Many Translations, One Universal Intention

Regardless of culture, humans seem to have a universal need to greet one another upon meeting and parting. Bowing in Japan, hand-clapping variations in African countries, and saying hello and shaking hands or hugging in English cultures – are just a few of the most commonly known salutations. While customs and traditions vary, there does seem to one greeting that is becoming more popular worldwide – that of Namaste. 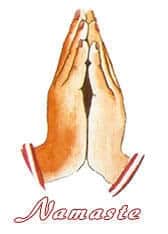 Often used by Hindus, Muslims, Buddhists, Sikhs, and other religions, Namaste is also revered within spiritual circles and meditation and yoga classes, and it’s being embraced far beyond its South Asian origins. You’ll often hear it spoken in combination with a slight bow and the Anjali Mudra – the placement of the hands together pulled close to the heart in a fashion similar to a prayer pose.

Use of the Mudra position to the heart and raised to the forehead is most often utilized in North and South India where formal versions of Namaste called Namaskar and Namaskara are common. Along with Namaste, these gestures represent surrendering ego to the spirit – recognizing that the life force within us as individuals is the same as that within everything and everyone.

Finally, a Word We Can All Agree On

Remarkably, the principle interpretations of Namaste have yet to be skewed by ‘new world linguistics’ or portrayed in a negative light. An example is the greeting ‘as-salamu alaykum,’ which is typically translated as ‘May peace be upon you,’ but is highly misinterpreted by fear mongers and those who aren’t ‘in the know’ so to speak. However, Namaste’s meaning is still universally recognized as one of peace, honor, and respect. So what does Namaste mean exactly?

The Meaning of Namaste: It’s a Spiritual Connection

The literal translation of this greeting varies with each language; however, they are all pretty much saying the same thing. In Sanskrit, the word ‘namah’ means bow, ‘as’ means I,, and ‘te’ means you, translating into “I bow to you.” A Hindi friend once explained that Namaskar is translated from ‘namoh’ and ‘sanskar’ translating loosely into English as “I bow to godly/good qualities within you,’ as her culture always tries to see the good in all things.

Some other popular translations and meanings of the word Namaste I hear frequently include:

Regardless of the language you speak, the word simply invokes a sense of sharing a spiritual connection and creates a sense and feeling of oneness and balance. Essentially, it’s a way that all humans can connect. 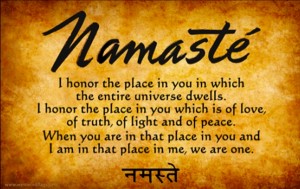 Raising Your Vibrations by Embracing Meaning of Namaste

There’s something about the universal recognition and the spiritual energy that accompanies the essence of Namaste that makes it a truly remarkable greeting. Just speaking the word Namaste – especially along with the Mudra posture – raises the vibrations of your intention to greet someone by honoring of their inner goodness/God/light. The kicker is, you’ll likely find yourself really meaning and accepting these positive thoughts when you say it – even if you aren’t particularly fond of your company at the time!

Embracing the spirit of Namaste can be a powerful manifestation tool, and we love hearing the various interpretations of the meaning of Namaste… What does Namaste mean to you?