Once believed by the ancients to be eternal ice sent by heavenly Gods, clear quartz also had early scientists puzzled. Until the late 1500s, many scholars thought that this lovely stone was fossilized ice. Today, we now know that clear quartz is a crystal and one of the most common and abundant elements on Earth.

The natural vibrations of this healing stone are very similar to the vibrations of humans, making it an ideal and popular stone for metaphysical healing work and for use in certain practices of magic. However, it is also widely used to stave off the effects of black magic and all types of negativity from energy vampires, radiation, and electromagnetic frequencies. 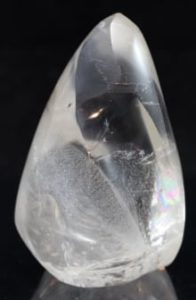 Activate All Levels of Consciousness with Clear Quartz Healing Stones

Associated with the Fire and Sun elements, clear quartz emanates white rays, and healers use it to help align the subtle bodies and chakras – particularly the Third Eye Chakra, Crown Chakra, and Soul Star Chakra. As one of the most revered and utilized stones in metaphysical circles today, clear quartz boasts a number of beneficial results when used in vibrational healing sessions and during the practice of meditation.

Clear quartz stones are ideal programming stones, and such crystals are used in common everyday gadgets as storage receptacles and retrievers information. Computers, cell phones, radios, and countless gadgets you rely on – rely on crystal technology. The ability to store and retrieve information allows one to place their intentions into the clear quartz healing stones to boost the power of their own thoughts as forms of energy to and enhance their universal manifestation of powers. These healing crystals are also thought to:

Because of its profound ability to enhance and strengthen the aura, clear quartz is thought to stimulate the entire immune system and help bring the body in physical balance and a greater state of health. Its dynamic receptivity to be programmed with any intention is why many holistic healers and vibrational energy practitioners use this stone to heal any condition or imbalance.

Share your knowledge and experiences using clear quartz healing stones with the Quantum Stones community below.