On September 28th, we’ll get a glimpse of the power of the stars when a total lunar eclipse turns the Moon crimson. This September’s rare Blood Moon in Aries has a fiery, powerful presence, and it’s bound to bring about incredible change. In fact, this event is so rare that it won’t happen again until 2033! Although an eclipse is beautiful to look at, it’s also a game changer — it will shake up our daily routine and force us to see everything that’s not working in our lives. The energy of a lunar eclipse can be challenging, but there are several ways you can take advantage of this Blood Moon’s trailblazing, dynamic energy.

How does a lunar eclipse work?

During a lunar eclipse, the Earth orbits between the Sun and the Moon, blocking out the Sun from casting its light onto the Moon. The Moon’s ethereal, white glow is simply a reflection of the Sun’s light, which is why we can see the Moon rising as the Sun sets in the early evening. This lunar eclipse is also a total eclipse, which occurs when the Earth, Sun and Moon orbit in perfect alignment. Here’s how it works: mid-way through the eclipse, the Earth fully encompasses and darkens the Moon in its Umbral shadow. Then, the Moon turns red when a small portion of the Sun’s light passes through the Earth’s atmosphere and is bent onto the Moon. (On a spectrum of light, red has an extremely high wavelength, so it’s not easily fragmented by the Earth’s atmosphere — that’s how the color shows.)

You can use this eclipse calculator to figure out the best time to view the eclipse from your location. 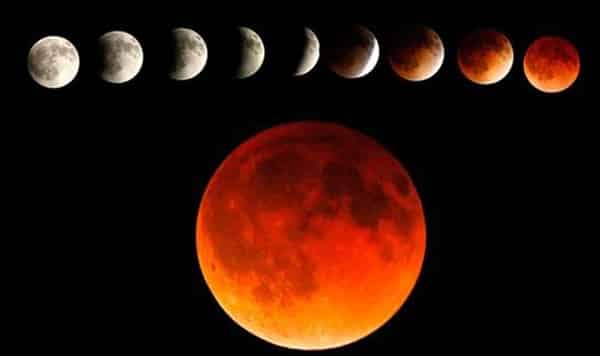 What to expect during and after the eclipse

Enormous, sudden changes rarely happen the moment a lunar eclipse begins. You’ll probably feel the impending effects of the eclipse around two days beforehand. About five months ago, we saw a lunar eclipse in Libra, and now we’re experiencing a lunar eclipse in its opposite sign, Aries. Everything that’s been unresolved in your life over the last five months, whether it’s issues in your romantic relationship or problems at work, are coming to a boiling point. September’s lunar eclipse in Aries will propel us to take back control where we’ve lost it, to understand if our needs are being met within our relationships and how we can get rid of what doesn’t serve us in our soul evolution. Aries, the first sign of the Zodiac, is headstrong and self-centered, but it’s also a sign of pure survivalism. This lunar eclipse brings an important question to light: are we really getting what we want?

Your survival guide for tackling this month’s eclipse

The powerful energy of the upcoming lunar eclipse may seem a little menacing, but here are a few tips that will help you reap its benefits and come out stronger than ever:

©Universal Copyright 2015 is authorized here. Please distribute freely as long as both the author Alexa Pellegrini and www.QuantumStones.com are included as the resource and this information is distributed on a non-commercial no charge basis.