You are here: Home › Ascension › Chakras › Energy and Frequencies › Spirituality › Balancing the Crown Chakra as the Universal Connector Center

Considered intrinsic to accessing one’s highest potential of dynamic thought, energy, spirituality, and enlightenment, the Crown Chakra is the center of the cosmic consciousness. It guides the inward flow of wisdom and enlightenment on both conscious and unconscious levels and is where one is said to connect with the cosmos and the Devine – it’s the gateway to the higher self.

Metaphysically speaking, the Crown Chakra is naturally believed to be located at the top of the head, with an ‘invisible cord’ that spans from the top of the skull to the tailbone, where your Base Chakra is located. Because it is the universal connector center, any blockages or imbalances within the chakra system can source imbalances in the Crown Chakra and impede your spiritual enlightenment and goals for ascension.

The state of balance within the Crown, or 7th Chakra is believed to have an affect on the pineal gland, central nervous system and the brain. Side effects of imbalances or a blocked Crown Chakra may include: 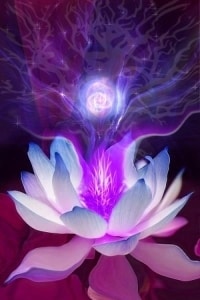 When in balance, the 7th Chakra lights up, signifying illumination as your awareness of the Divine expands on both individual and universal levels. Achieving balance in this chakra is truly the way to experience and promote your path to ascension in higher universal planes! Many auric healers use the healing powers of crystals and stones to cleanse, balance, and enhance the psychic powers that lie within the Crown Chakra. The most commonly used stones include Clear Quartz Crystal and Amethyst.

Amethyst stones and crystals are considered Stones of Spiritual Growth, with darker tones symbolizing high spiritual attainment and paler lilacs representing consciousness and love for humankind. Violet is the primary color associated with the Crown Chakra, and is a magnificent stone for transformation.

Clear quartz is considered The Stone of Ultimate Power and works well to balance several chakras and to align the Seven Subtle Bodies. This crystal works well to enhance the power of other healing stones, making it the most widely used stone in the metaphysical healing realm.

Beyond the Crown Chakra

You’ll likely discover your healing stones to be useful in raising your vibrations, warding off negative energies and harmful electromagnetic frequencies, and elevating you to a greater level of cosmic consciousness. What are your experiences with the Crown Chakra and healing stones and crystals? Share your story!